Statistical Accounts are non-financial accounts that can be used to track operational information, such as the number of Employees, number of tables/seats, and guest count, among others. Once created, Stat Accounts can be posted to through the normal Journal Entry process; however, when a Stat Account is used, there will be no distribution for that detail as Stat Accounts do not post to the General Ledger.

Statistical Accounts are also available on budgets so that reports can be created to include their transactional and budget data. When used, Stat Accounts allow Operational data to be added to Financial Reports, such as Custom Financial Reports (Trial Balance and P&L reports), which include both Actuals and Budget information for each Stat Account, and other Account-specific reports within 'My Reports', such as the Trial Balance, GL Account Detail, Account Balance by Location, and Transaction Detail Export reports.

It is important to note that since Stat Accounts do not post to the General Ledger, they are one-sided entries and will not need to balance, and they can be entered in both open and closed periods.

As of now, Guest Count and Transaction Count are the only Default Stat Accounts in the system that are automatically updated daily via a DSS Journal Entry. However, additional Stat Accounts can be created manually via the Import Tool. Click here to learn how to import Statistical Account data.

Since a Stat Account is a non-financial account, it does not need to be grouped by a GL Type. Therefore, the GL Account record is structured differently for Stat Accounts. 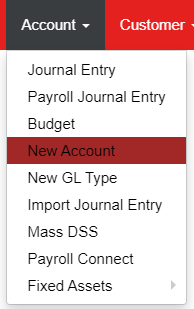 1) Stat Account Type - The way in which information is pulled for this account. This information is usually predetermined based on the selected GL Type, but since a Stat Account does not post to the General Ledger, the User needs to classify this type. The following are the options used to designate the account type:

2) Better / Worse Direction - The manner in which the variance is displayed within Custom Financial Reports when a Stat Account is used with a Better/Worse Column Type. On non-Stat Accounts, this is determined by GL Type. The following are the variance options:

Note: Stat Accounts can also be created via the Import Tool and Setup Assistant.