Mass Role Update allows an Admin User to update multiple User Roles, User Locations, and Report Roles for system Users at one time and in one place. 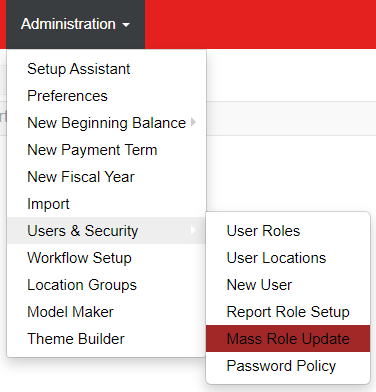 1) Security Type - This series of buttons allows a User to select the Security Type that needs updating. Once selected, the 'Select Drop-down' field will update its search name. The three Security Types listed are:

2) Select Drop-down - This drop-down selector allows the User to filter by Role, Location, or Report Roles

When a selection is made in the 'Select Drop-down' field, two grids will populate the bottom half of the screen for Users who do and do not have the selection assigned to them.

To provide additional Users access, click the name of the Users in the 'Users without' grid and their names will shift over to the 'Users with' grid. Reverse this process for any Users who need to have their access removed. Repeat until all Users have their security restrictions updated. Any updates made will be automatically saved.