Report Roles grant access to specific Reports found in 'My Reports'.  Click here for more information on My Reports.

Report Roles can be be assigned using three different methods:

Assign on the Security & Permissions page

Users can be assigned on the Users subtab:

User Records are located in the 'Users' list in the 'Administration' subsection of the Accounting Module.  Open the User Record of the User that will have the Report Role assigned and navigate to the 'User Roles' tab.

User Report Roles are located in the section located to the right of the tab.

For Users that will need access to 'All Reports', click the 'All Reports' toggle to bypass Report Roles and grant full access to 'My Reports'.  The selection will be saved instantly. 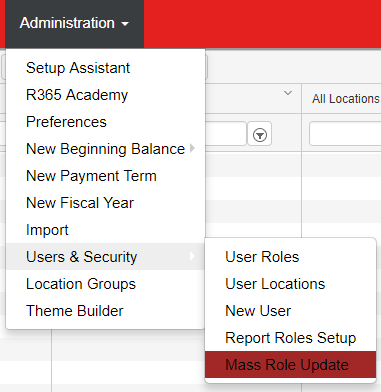