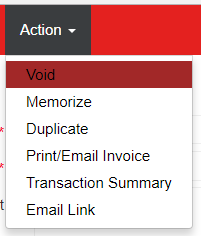 Typically, Voiding is used when you want to ‘Delete’ a transaction on a different day than when it was originally created. This can happen when financials or aging reports have been shared with outside parties and subsequent changes need to be made to your records without changing the data as it was sent out.

Note: When choosing to Void a transaction, it is important to not delete either the transaction or the reversing transaction. This will ensure that the Void is documented correctly in the system.

Step 1: Decide whether Voiding or deleting a previously entered transaction is best.

Voiding a transaction in Restaurant365 does the following:

There are two main reasons for voiding a transaction instead of deleting it. Restaurant365 does allow you to delete transactions if you prefer as long as your security permissions allow it.

Step 2:  Choose “Void” from the top ribbon of a transaction that has been previously approved. Voiding is only relevant for ‘Approved’ transactions. If a transaction has a status of Unapproved, then it is available to be deleted or simply modified.

Step 3:  A second message is presented that tells us that a second transaction will be created to reverse the original. We have the ability to select the specific date of the reversing entry. Typically the date chosen is either the original transaction date or the current date. Pick the original transaction date if you desire the result to most resemble a ‘delete’ (but leaves you with an audit trail.) Pick a current or future date if you want to make sure the numbers in a prior period are not impacted by this reversal.

Then click ‘OK’ and the original transaction is displayed with a few changes:

You have successfully voided a transaction.