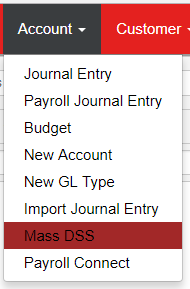 Once the screen loads, set each Mass DSS parameter

1) Location - The Locations that you will review and approve

3) Unapproved Only - Includes only unapproved DSSs when checked

The DSS tab will populate with each available DSS that meets the set parameters. If any Approved DSSs were included, the 'Approved' checkbox was already checked, indicating that this DSS is Approved and requires no additional attention. Each of the unchecked lines represent the Unapproved DSSs that you can review.

Review each row for the correct Net Sales and Deposit information. To see more information in this screen, including all the details from the Journal Entry, click on the row, then the expansion triangle to see the details. You can also click on the name of the DSS in the last column to drill into the full DSS record in its own screen.

Once the DSS is reviewed and the appropriate information is confirmed, then check the box in the first column called 'Approved'. This will flag it for approval, and upon clicking 'Save' (in the upper left corner), it will be marked as Approved.

This will show you any unassigned house accounts.

This will show you any days in the specified time period that do not have a DSS record.