Restaurant365 Customers can have their Daily Sales Summaries re-imported easily, regardless of whether their POS Systems are Cloud or non-Cloud-Based.

It is important to note that an existing DSS must be deleted before re-import. To delete a DSS, select the necessary DSS(s) and click the 'Delete Selected' button above the Daily Sales Summary list view, as shown below.

This article discusses the following:

The main reasons that a Daily Sales Summary would need to be re-imported would be due to a change made in the POS or a GL Account mapping change. By default, the integration will automatically re-poll when a DSS has a $0 Net Sales or when a DSS is simply missing. However, when other reasons occur, simply re-polling a DSS can often times resolve these initial issues. With these in mind, review more details about them below:

The Repolling window is the easiest way to have a Daily Sales Summary re-imported. 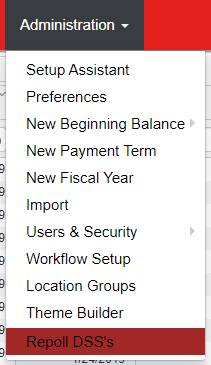 To open the Repoll window, hover over 'Administration' in the top ribbon and click 'Repoll DSS's'. When the window opens, click the day range and Location that the request is made for and click 'Submit'. 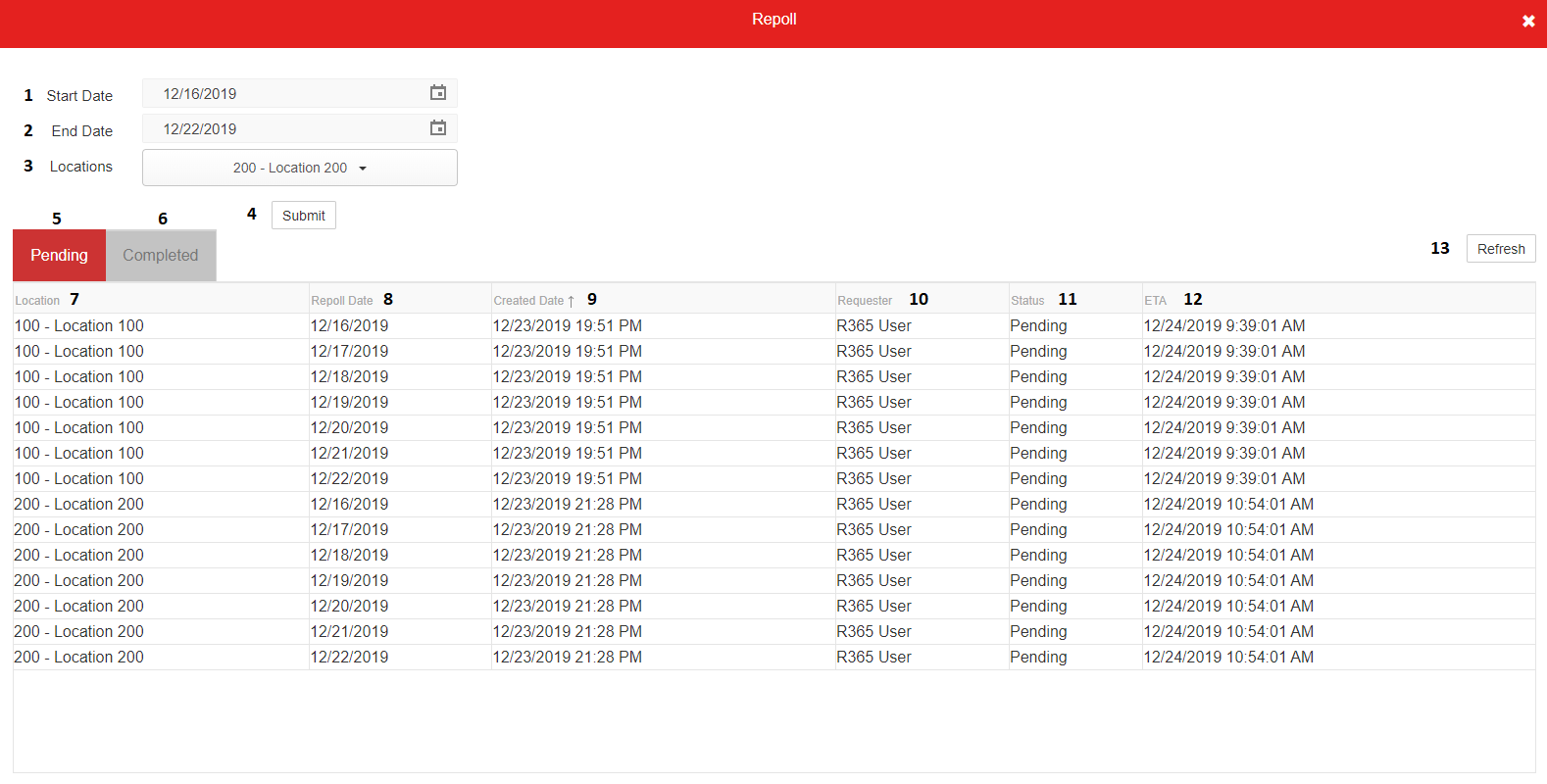 3) Locations - A listing of all Locations. Select the Locations that need re-polling

4) Submit - This button will submit the request. A confirmation message or an error message will appear, depending on if this is the first time the request is being processed or if it is still pending

5) Pending Tab - This tab displays the details of all re-poll requests made. Only the requests made in the past 7 days will be displayed

6) Completed Tab - This tab displays the details of all completed requests made and their statuses. There are two statuses that can be listed on this tab:

7) Location - The Location of the request

8) Repoll Date - The date of the request

9) Created Date - The date the request was made

10) Requester - The User who made the request

11) Status - The status of the request

For Repolling Data Older than 30 Days in the Past

As the repoll tool is only able to retrieve DSS data 30 days in the past, please contact R365 Support and include the following details to get DSS data older than 30 days from the current day repolled:

To perform a manual re-import, the User should double-click on the R365 Import icon:

Before attempting to re-import manually, and before contacting Restaurant365 Support, please review the article Troubleshooting tips for missing DSSs. 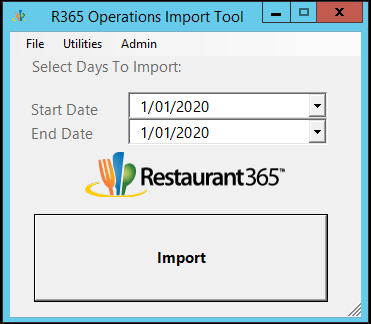 When R365 Import icon is clicked, a prompt will open where a start date and end date can be entered to specify the range of days needed for re-import.  After entering the date range, click the  'Import' button to initiate the import.

Depending upon the internet connection speed and how many transactions occurred at the Restaurant Location for this date range, the import may take between 1 and 5 minutes to complete. A progress bar will appear while the import process is taking place. The import tool will close itself automatically when the import is complete.

Upon completion of the import, the newly re-imported DSS files will be present in the Operations Module of Restaurant365.