For POS Integrated Locations, a Daily Sales Summary (DSS) file will be imported each day for the prior day's Sales and Labor. In addition to the DSS file being imported each day, three DSS Journal Entries are created from the data on the DSS: 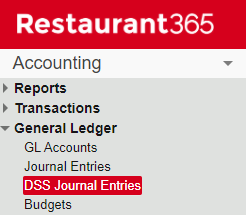 Beneath the 'Details' grid, the User has two options to include attachments to the DSS Journal Entry:

DSS Journal Entries approval status are predicated on the DSS record form, which are generated.

Conversely, to unapprove a DSS Journal Entry, the DSS record must first be 'Unapproved' in the Operations module.